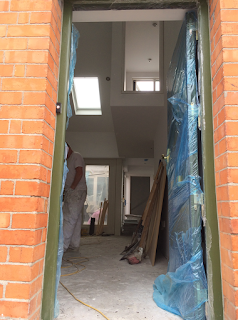 The cottage refurbishment near Herbert Park is nearing completion and this image shows the gallery bedroom with internal window facing front door.  We provided an internal courtyard so that the floors area could be optimised.
Posted by Unknown at 2:39 AM No comments: 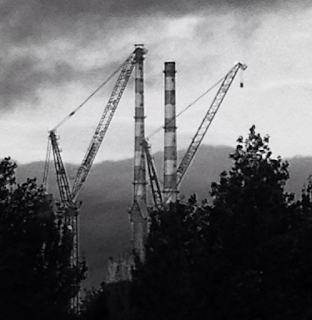 Now that we are on the verge of having a government of sorts in Ireland, at last, I expect they might look at the housing crisis and put something together to facilitate construction.  It took a while for the penny to drop in government circles during the crash but the narrative went something like this: "The developers and their like ruined the country and so we hate greedy developers."
Construction then stopped and the dole queue grew.  Jobs were now needed and guess what: if 4 are on the dole 2 are men and one of which is construction related unemployed and the industry shrunk to a tenth of it's former size it  now dawns on us (government) that we must help construction.  CIF said drop the VAT to 9% but FG/Lab got cute and said no, but we'll set up the HRI and lasoo a few cowboys into the tax net while we give the poor houseowner a break and a much needed wee extension.
I suppose at this stage we needn't demand too much government interference, as this normally unbalances the market, but perhaps further tax relaxation would be good.  For starters reduce professional's VAT from the luxury 23% to the builders 13.5%. Also look at the full tax take on development and ease it so the ("nasty") developers get their profit.  If the truth be known there will be no movement without developers profits.  Comments welcome.
Posted by Unknown at 2:38 PM No comments: 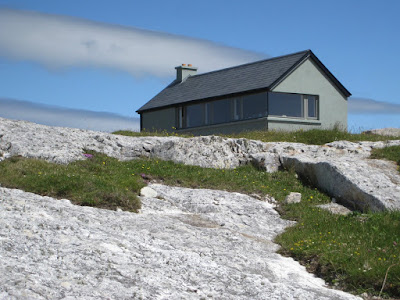 Recently completed rebuild of coastal cottage with dramatic corner window designed by ABA Architects. The other side is more conventional.
Posted by Unknown at 7:23 AM No comments: 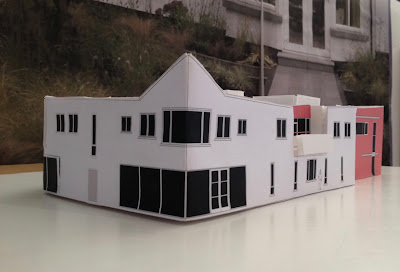 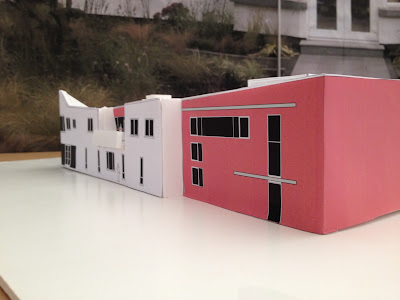 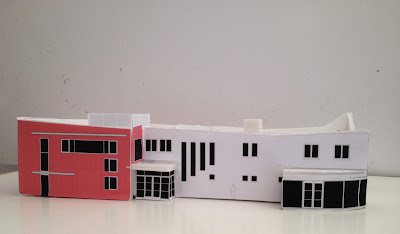 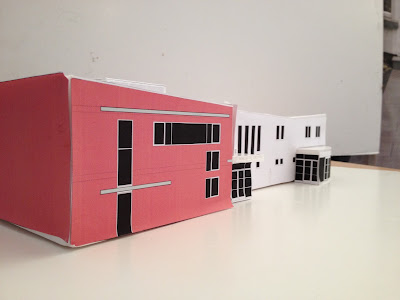 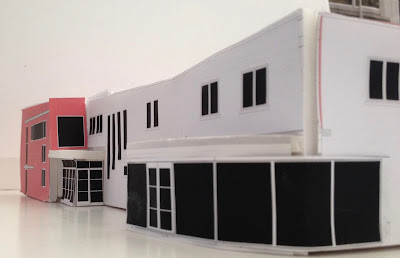 We will shortly be lodging a planning permission for this new church in Tallaght and in the design process saw it necessary to create a simple scale model to examine different fenestration options. 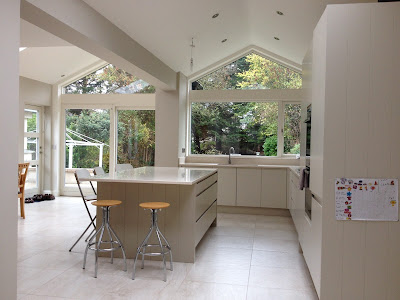 For reasons beyond the control of client architect and contractor this house extension and alteration was completed after a protracted delay to the start.  The clients are to be commended for exhibiting something close to the patience of Job!  Some things are worth waiting for and I trust that this project fits nicely into that category. I previously wrote about this project in an earlier post. 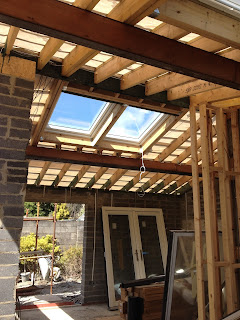 Changes are afoot for the application of Building Control Regulations for extensions and one off houses with September 1st 2015 being flagged as the date.  In principle an opt out of the requirements of S.I. 9 is being mooted but concern is being expressed that 2 standards will develop.  We understand that local authorities are being consulted by the Department with the intention of ramping up inspections for such "opt out" projects but with government resources being finite the effect of this can, at best, be limited.  Questions are being asked by the professional bodies on the matter as the details remain a mystery.
My advise to clients would be to not "opt out" as this may effect your house value in the long run, not to mention the quality of construction.   For all its faults the new Building Control Regulations (S.I.9) is increasing the culture of compliance which is the very thing that everyone sought in the first place.
At ABA Architects our recent experience is that we are seeing local authorities carrying out more inspections and their input has been helpful  and beneficial to the projects.   As always we are happy to advise you on the specifics of your project and the many legal requirements attached to same.
Posted by Unknown at 8:43 AM No comments: 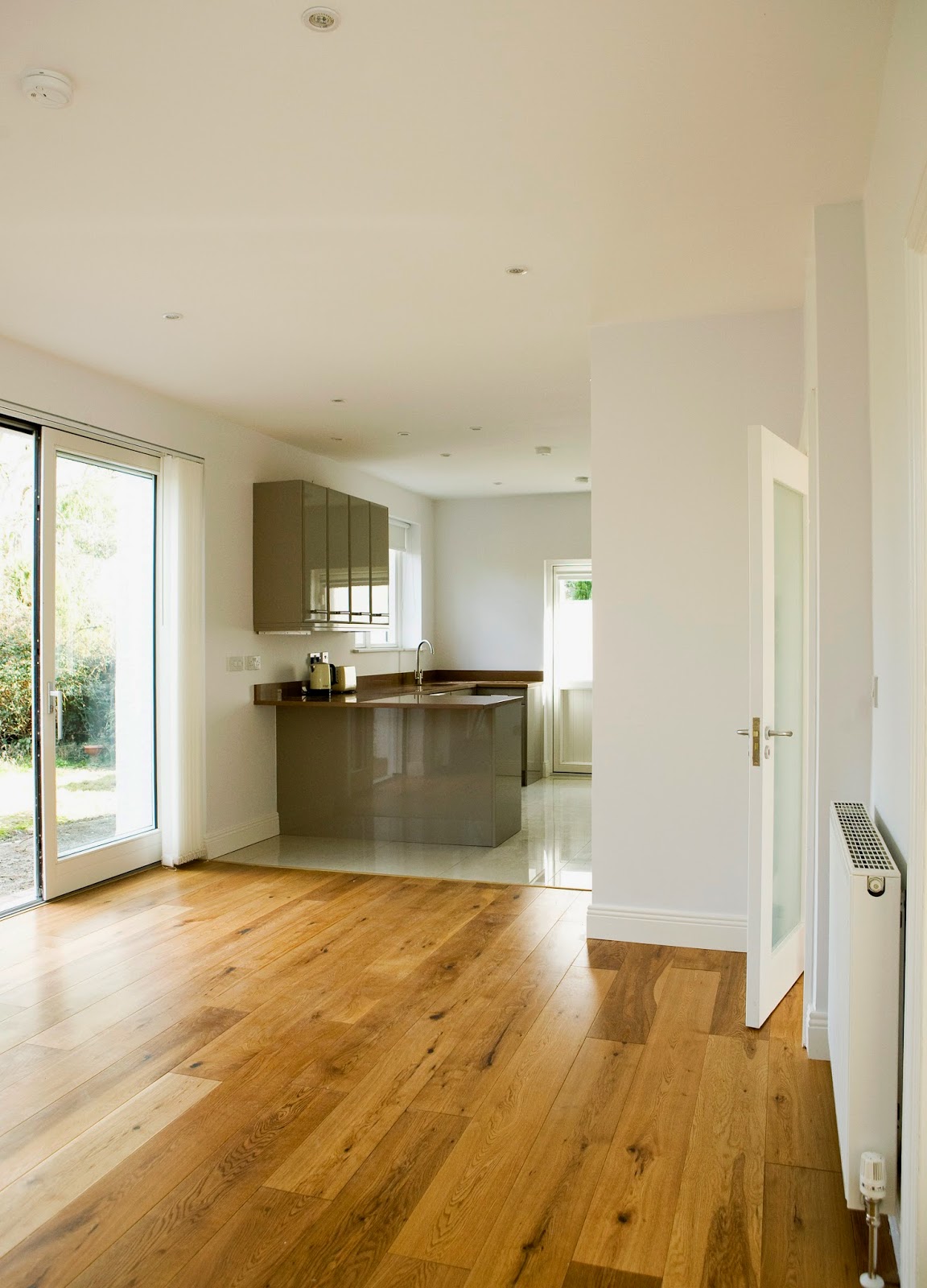 Without an extension this house at Rosemount Crescent Dublin 14 was entirely refurbished. ABA Architects provided both an architectural service as well as an Interior design consultancy.  Kitchen and Bedroom furniture was provided by Kelly Design Ltd.  Contractor was Paul Gallagher of Mellor Enterprises Ltd.  At ground floor level the Kitchen was opened to the dining and living space. Sliding double doors between front and rear reception rooms allowed the sunlight penetrate to rear of house. Separate WC and shower rooms off hall were altered to Visitors WC and passage to converted garage. Stairwell was refurbished and new opening provided to passage leading to relocated main bathroom at first floor level. Master bedroom was provided with dressing room and en-suite shower bathroom. A fresh contemporary look was provided to this 1950's house as well as insulation, plumbing, heating and electrical upgrades. More images are available on our Houzz website
Posted by Unknown at 8:24 AM No comments: